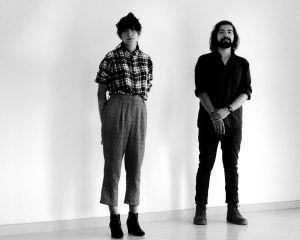 A few months after the album came out, the group embarked on an extensive US tour that took them from one coast to the other. They made a stop off here in Michigan, playing at Small’s in Hamtramck, and I had the good fortune of putting them up for the night at our house in Ann Arbor and getting a chance to chat with them about music and whatnot. What a great group of people!

Their follow-up the next year, titled Chambers, was a much darker and rougher affair, and didn’t contain many tracks that I clicked with – though a few rose above the murky haze, like “Myth of the Wise”. However, I was totally blown away by 2016’s Balance, – a return to form and so much more. Again, each track revealed itself slowly after repeated listenings – until you could sense the musical threads that are deftly woven throughout the album.

2019 marks the launch of the band’s record label, Registros El Derrumbe – with the release of De Facto, their fifth album. Continuing down the sonic path laid out in Balance, the songs here cover vast musical territory – and for the first time sung entirely in their native Spanish. For a sampling, listen to “Linéas En Hoja” on the most recent Sonixcursions Podcast.

To get an idea of where this duo’s style started out, listen to their debut album, 2011’s On Welfare. There’s a playful magic in those early songs that instantly draws you in, and it’s not as abrasive as some of their later work. An excellent example is the song “These Days”, featured in the video above.

Following Lorelle Meets the Obsolete’s musical arc over most of the past decade, I’m excited to see where they go next. With each release, they continue to set themselves apart from their psych contemporaries.