Hopefully with the weather getting nicer and the lockdown starting to let up, the creative spirits will keep rising and we’ll be able to see live music again. I mean, at any good space rock show, people are 6-feet apart anyways.

I’ve been listening to a lot more music lately, and have also been working on the Masstransfer book that should come out later this summer. Though, it’s hard to believe how quickly a month goes by these days – time seems to have lost some perspective. But not all hope is lost, I still somehow seem to know which day is Monday.

For fans of textured guitar treatments smeared across a sonic canvas, The Virgance (aka Nathan Smith) returns for one final flight with Flying V, released this week by El Vals del Conejo. Though some song titles are a bit combat-oriented (“Wingman”, “Battle Damage”, “Attack Formation”) – the vibe is closer to flying fast through the stratosphere, high above where the Earth seems like a blur. Drum beats add a rhythm and structure, but the sharp edges are smoothed over and add to the pulsing movement of the songs. It’s a sound that shares a similar origin as the hazy realm of Flying Saucer Attack and Third Eye Foundation.

I’m sorry to hear this is the last Virgance album, having followed Nathan’s work for most of the past decade, but also excited to see what his next chapter brings. 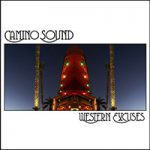 Sean Byrne’s been a busy guy lately. The former Lenola drummer and one-half of Twin Atlas has emerged this spring with 2 releases, including one from a new project called Camino Sound. The EP, Western Excuses, really has it all – some post-rock, some surf, a little dub. All instrumental and ready for the soundtrack for your next backyard party (or virtual happy hour).

Earlier this month, Sean also put out some new material under his Lazy Salon moniker. The songs expand on his more electronic sound, though he throws in dashes of glassy guitar along with heavier rhythmic foundations (he is a drummer after all).

I Am Your Captain

Following a few years of hiatus, thankfully to record new Air Formation material, Ben Pierce returns with his solo effort I Am Your Captain. This EP, entitled IAYC, veers towards a darker and edgier sound than his other works, not sure if that’s down to the current global situation or just a change in personal tastes. I’m particularly digging “A Little Askew”. 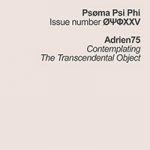 Taking a pause in his usual electronic-based explorations, Adrien75 offers up a collection of 6 improvised guitar pieces, reminiscent of his earlier works going back to Coastal Acces. Inspired by a Terrance McKenna passage, Contemplating The Transcendental Object is 6 improvised loop-centric guitar tracks aided by various effects and treatments, exploring “tonal hills and bends with foggy, half-recollected curvatures of glissando and lethargic strums”. Worth checking out.

Holy Wave have a new one coming out this July, entitled Interloper. They’ve released 3 videos ahead of the release (was originally scheduled for May), and you can find them as well as pre-order your vinyl over at the Levitation website. Here’s the video for “I’m Not Living In The Past Anymore”:

That’s all for now. Thanks for reading, and be sure to subscribe to the Sonixcursions Podcast to hear these and other great bands, and until next time, pleasant orbitings…